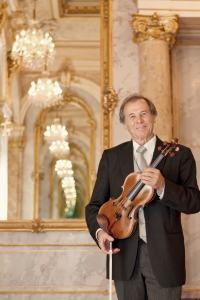 1962 to 1969 – Studied at Mozarteum Salzburg.
1969 to 1972 – Studied at Music School of Higher Education Vienna.
1972 – Joined the Vienna State Opera Orchestra 1974 – Vienna Philharmonic Orchestra in 1974 (First Violin).
1980 – First Violin of the Seifert Quartet.
1988 to 1992 – member of the Ensemble Wien.
1993 – awarded the Record Prize
1996 – received  the Award of Mozart-Interpretations, Vienna Mozartgemeinde.
1995 – founder and leader of the Vienna Violin Quartet.
Since 1999 concert master of the Ensemble Corso Vienna.
2007 –  founder and leader of the Ensemble The Viennese.
In 2008 established the project Philharmonic Sound and Taste in Styria and conductor and solo violinist of the Strauss Festival Orchestra on a tour through Rumania.

Performances in different countries in Europe, at the Salzburg Whitsun Festival, Mozartweek Salzburg, in Chile, China, Japan and New York.