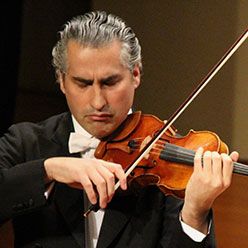 In 2004, Ballot moved to Vienna to develop his musical career, establishing himself as a regular first violin in the Vienna Philharmonic and the Vienna State Opera Orchestra, performing under the most prominent conductors.

He has earned himself a remarkable reputation for tutoring young orchestras.
2009 – 2010 – Appointed Artistic Advisor, Orchestra Academy in Ossiach (Carinthia) under the patronage of the Vienna Philharmonic.
2014 – 2016 – Conductor – Upper Austrian Youth Symphonic Orchestra

He also gained the opportunity to work as assistant conductor for several projects, including Massenets Manon and Hindemiths Mathis der Maler with the Radio Symphony Orchestra Vienna at the Vienna Konzerthaus, and Wagners Tristan und Isolde at the Opéra in Nantes.
Ballot was made Artist-in-Residence of the 2013. at the Brucknertage summer music festival,St. Florian

As of spring 2018 Rémy Ballot has presided as Chief Conductor over the newly founded chamber orchestra KlangKollektiv Wien.

The majority of the 40 regular musicians of the orchestra are also members of Vienna Philharmonic, the Vienna Symphony, the Vienna Radio Symphony Orchestra, the Tonkünstler Orchestra and the Orchestra of the Vienna Volksoper.