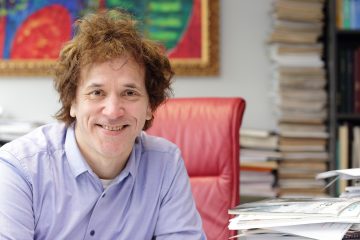 Josef Martin Penninger, born in Gurten, Austria, is an Austrian geneticist and the Canada 150 Research Chair in Functional Genetics. Dr. Penninger is currently the Director of the Life Sciences Institute (LSI) at the University of British Columbia. He studied medicine at the University of Innsbruck in Austria. From 1990 to 1994 he worked as post-doctoral fellow at the Ontario Cancer Institute, thereafter until 2002 at the Department of Immunology and Medical Biophysics at the University of Toronto. As Principal Investigator of Amgen, his independent lab contributed to the development of the antibody Denosumab for bone loss and also found the first connection for RANKL to mammary gland development in pregnancy and breast cancer. In 2002, he moved to Vienna, Austria to start and develop the Institute of Molecular Biotechnology of the Austrian Academy of Sciences, which is now the largest and most successful institute of the Academy based on high impact publications and the number of European Research Council grants received. Dr. Penninger envisions to recreate this environment at the LSI to nurture and train the best and brightest young minds of UBC scholars. His major accomplishments include pioneering insights into the molecular basis of osteoporosis, breast cancer and metastasis, and he has published extensively in several multidisciplinary scientific journals, with over 60 publications in Cell, Nature, and Science. He has received numerous awards including the Wittgenstein Prize of the Austrian Federal Government. the Descartes Prize for Research, the Ernst Jung Prize for Medical Excellence, the Innovator Award of the US Department of Defense, and most recently the Austrian Cross of Honor for Science and Art First Class.