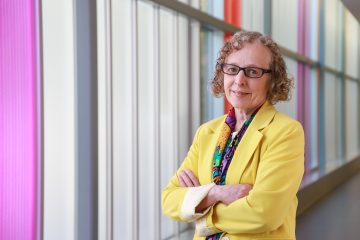 Dr. Allison Eddy is a graduate of McMaster University Medical School. After completing a Pediatric Residency at McGill University and a fellowship in Pediatric Nephrology at the University of Minnesota, she became a member of the faculty at the University of Toronto and a nephrologist at SickKids for 12 years. In 1997 she was recruited to Seattle as Professor of Pediatrics at the University of Washington and Head of the Division of Pediatric Nephrology at Seattle Children’s Hospital. Dr. Eddy also served as the first Director of the Tissue and Cell Sciences Research Center at Seattle Children’s Research Institute (2007-12), principal investigator of a NIH-funded research-training grant in Pediatric Nephrology and the program director of a NIH-funded Child Health Research Center.  In 2012 Dr. Eddy returned to Canada as Professor and Head, Department of Pediatrics, University of British Columbia and Chief, Pediatric Medicine, BC Children’s Hospital. Dr. Eddy has been a basic science clinician-investigator since 1985 and is internationally recognized for her work on the cellular and molecular mechanisms of kidney fibrosis, the final common pathway leading to chronic and end-stage kidney disease. She has published over 100 peer-reviewed manuscripts. From 2001-2007 she was the Deputy Editor of the Journal of the American Society of Nephrology and recently completed a term as an Associate Editor for the journal Pediatric Nephrology. Dr. Eddy is very excited about a collaborative project that she is currently co-leading at UBC Faculty of Medicine  with the Head, Department of Obstetrics and Gynecology to launch the first of its kind Graduate Program in Women’s and Children’s Health: From bench to bedside to populations.