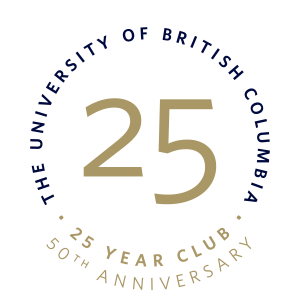 Welcome to the 50th Anniversary web page of the UBC 25 Year Club. Since 1971 the University has held an annual dinner to recognize the long service of staff employees. Those staff with 35 and 40 years of service have been celebrated at the annual dinner since 2004 and 2014 respectively, and recognition of 50 years was introduced in the anniversary year.

Below are some documents on the origin of the club as well as other information on the first dinner.

History of the Club (pdf)

Reflections on the Early Years (pdf)

Over the past 2 years, the co-chairs and committee members of the 50th Anniversary Committee have worked on updating the list of inductees, researching relevant historical documents in the University Archives and identifying photos from previous dinners. All of this information, including photos, PowerPoint presentations and programs (where available) is being uploaded to the respective years at www.ceremonies.ubc.ca/25yearclub. The UBC Legacies website is a wonderful variety of stories and materials about the history of UBC, as seen from the perspective of faculty, staff, alumni and friends of UBC who in one way or another have had a long association with the university. Eight members of the 25 Year Club are featured: Steve Bohnen, Harvey Burian, Debbie Harvie, Joan King, Robert MacKenzie, George McLaughlin, Richard Moore and Bev Richards.

With particular thanks to Stephanie Renwick and Becca Tobin from Ceremonies and Events for their technical and administrative support on the 25YC 50th Anniversary website and archival pieces.

For more information or to submit a memory or photo, contact the UBC Ceremonies Office: ceremonies.office@ubc.ca