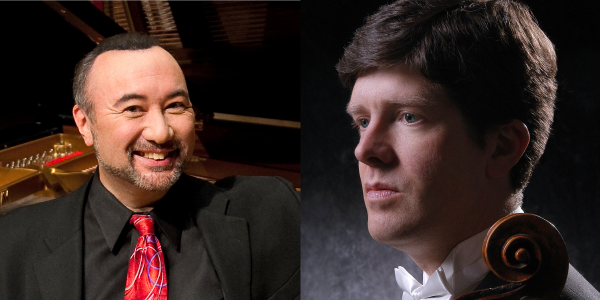 Desmond Hoebig, Professor of Cello at The Shepherd School of Music at Rice University, has had a distinguished career as a soloist, orchestral and chamber musician.

Desmond was born in 1961 and raised in Vancouver, Canada. He studied with James Hunter, Jack Mendelsohn and Ian Hampton. In 1978 he moved to Philadelphia to study with David Soyer at the Curtis Institute of Music. He received his BM and MM at the Juilliard School with Leonard Rose and Channing Robbins.

Mr. Hoebig has been a soloist with many prominent orchestras in North America, including; Cincinnati, Cleveland, Houston, Montreal, Toronto and Vancouver. His international orchestral engagements have been in Germany, Spain, Portugal, Japan, Mexico and Colombia.

As a chamber musician, Desmond was the cellist with the Orford String Quartet when they won a Juno award for the best classical music album in 1990. He has also performed for 30 years with the Hoebig-Moroz Trio and a duo with Andrew Tunis. Mr. Hoebig has taught and performed at festivals throughout North America, including; Aspen, Banff, La Hoya, Marlboro, Music Bridge, Orcas Island, Sarasota and Steamboat Springs.

Before joining the faculty of The Shepherd School, Mr. Hoebig had been Principal Cellist of the Cleveland, Houston, and Cincinnati Symphony Orchestras.

Internationally acclaimed pianist Jon Kimura Parker was born and raised in Vancouver. He is an Officer of The Order of Canada and holds Honorary Doctorates from the University of British Columbia and the Toronto Conservatory of Music.

His YouTube channel features the Concerto Chat videos, promoting the piano concerto repertoire. He is the founding Artistic Advisor of the Orcas Island Chamber Music Festival, the Artistic Director of the Honens International Piano Competition and Festival in Calgary, and Creative Partner for the Minnesota Orchestra’s summer programming. Jon Kimura Parker is Professor of Piano at the Shepherd School of Music at Rice University.

“Jackie” Parker studied privately with Edward Parker and Keiko Parker, at the Vancouver Academy of Music and at UBC with Lee Kum-Sing, at the Banff Centre with Marek Jablonski, and at The Juilliard School with Adele Marcus. He won the Gold Medal at the 1984 Leeds International Piano Competition. He is married to violinist/violist Aloysia Friedmann. For further information, please see jonkimuraparker.com, montrosetrio.com, offthescore.com, oicmf.org, and honens.com. For further information, please see www.jonkimuraparker.com.